“This shop is part of a social shopper marketing insight campaign with Pollinate Media Group™ and Jelly Beans but all my opinions are my own. #pmedia #JellysAreBack http://cmp.ly/3/8vNxcO” 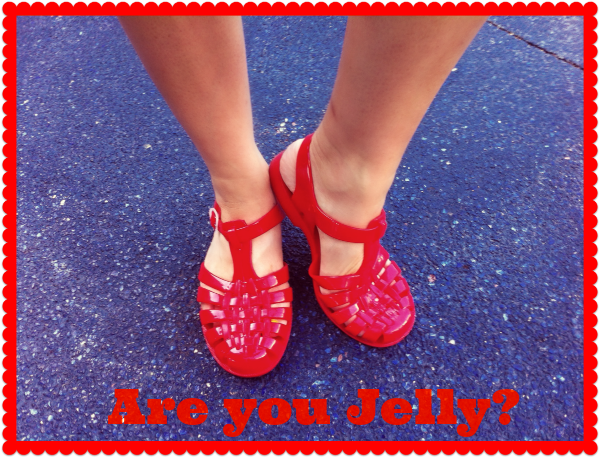 She had it all.

The swing-set, the princess clothes, the bike with a matching helmet.

I was the middle child in six. Situated at the very hub of hand-me-down central.

I could put up with the swing-set. We had a pretty nifty swing made out of an old box crate and rope. The tricks we wielded with that contraption blew her safe little swing-set out of the park. {pun intended}

The princess clothes were also a little too mass-produced for me. So unlike my ragtag “Gypsy” get-up assembled from Mom and Grandma’s old stash. She had Ariel and Jasmine screen-printed on her stuff. I had a prom dress. I’ve always been more of a vintage girl anyways.

And the bike with the matching helmet? Eh. I could get around faster on my brother’s old BMX bikes anyways. Who needs a helmet?

What I could not stand for were the Jellys.

She had three pairs. Clear, pink, and blue. Such a variety! Each pair whimsically flecked with glitter.

Please do not focus on the pun when I say I was jealous of her Jellys. Green with envy. Green with flecks of glitter envy.

We bought the drugstore version. I skipped along like one with true twinkles in her toes…until they broke, quite suddenly. Oh, the horror! I just wanted a pair of Jelly’s that could rival my spoiled little friend’s.

And then there came that fateful day when I had had enough of her extravagant lifestyle. She was daydreaming out loud about the next pair of Jellys her mom would buy for her.

She already had three pairs!! What more could she want? Clearly the options of purple, green, and hot pink had never entered my mind.

While she deliberated on the next color to add to her collection, a horrible fury took  over me. Before I knew what was happening I blurted it out:

“Well, I’m getting a pair of RED Jellys.”

Her expression moved from smug, to disbelief, to fear, and then back to smug.

“No way, ” she said. “I’m getting red Jellys! You know you won’t get them!” She emphasized those last words with a taunting pirouette.

At that moment, the stars aligned. Time and space melded into the perfect opportunity. I think I might have even heard angels singing off in the distance.

A giant, steaming pile of it, just a few precious steps away from her glittery toes.

“Hey! Come over here! I think I just saw a mouse!”

Dizzy and distracted, she pranced after me, flattening her pretty foot right in the center of the pile.

Panic set in as the juicy mound encircled every crevice of her ankle, foot, and Jelly.

That Jelly was done for.

Victorious, I was still pragmatically bewildered at her reaction. After all, she had TWO other pairs and was supposedly to get yet another set.

She ran to her mom, who took in every ounce of feces on her daughter’s feet.

“You can’t get in the car with that on your feet,” she explained to my friend as they carefully removed the brown Jelly with a paper bag.

I can still hear her cries as her mom dumped to doo-doo shoes in the trashcan. I can still feel a twinge of guilt that I caused those tears. But I can also still feel the sweet taste of a middle child finally having the upper-hand.

You see, Jellys are back. That’s right. BACK. With a bang. 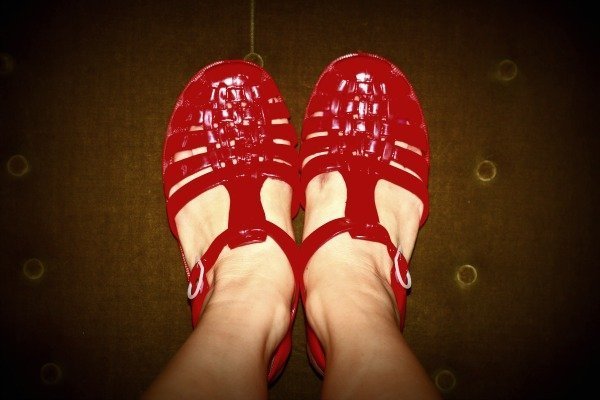 And so I think of my young friend every time I look down and see my brand new, shiny red Jellys. I got ‘em.

Twenty-one years later, I got them. 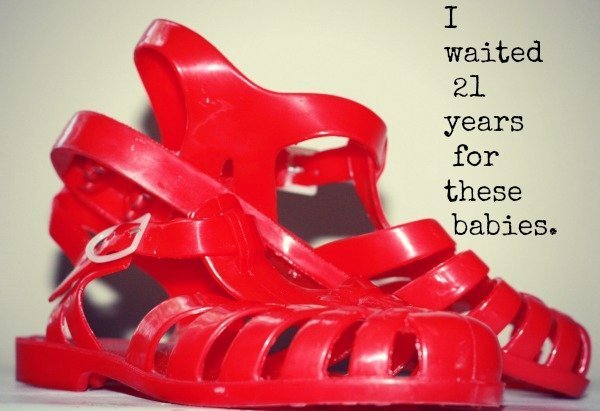 They are every bit as wonderful as I dreamed they would be. Now I just have to look out for dog poop.

Do you have any memories with Jellys? Do you need to solve a childhood injustice by getting a shiny pair? Welp, they’re back, I tell ya. And it’s free shipping to the U.S. These are imported goods, you see. Go check out their shiny new website. Order some for your little one, and yourself. My daughter is totes jelly of my Jellys. 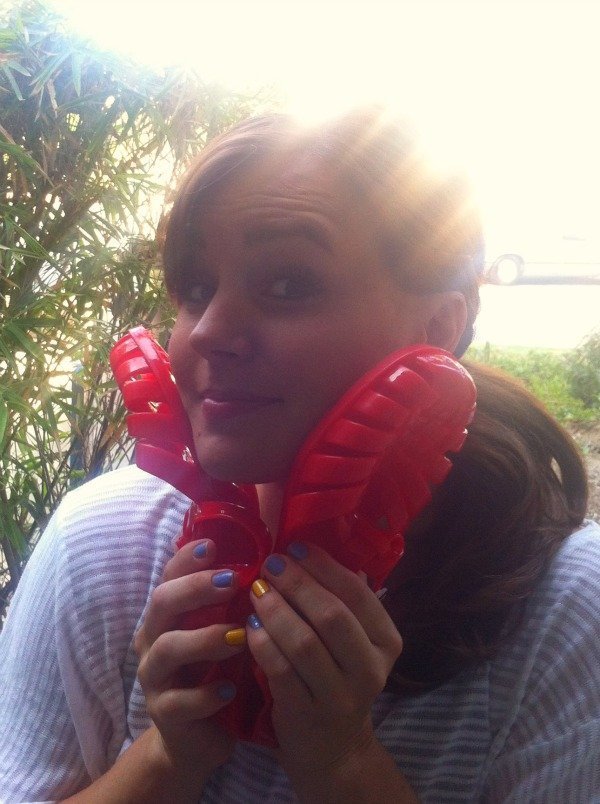