One man’s trash is another man’s treasure. Oh, how true are the words when you have no money and have immediate needs. Well, I guess a kitchen table isn’t necessarily a “need.” We could go Asian style and sit on our bums around the coffee-table–I’m sure it’s more eco-friendly on some level. (Boy, am I conscious of that living in Davis! Phew–more on that some other time). Anyways—-we have to sell our kitchen table because there simply is no room for it. This depressed me greatly at first. And then I saw them: two rejected chairs by the dumpster. They looked so forlorn and pathetic that my heart had a little pitter-patter action and my creative synapses started firing away. Hmmmmm. If only we had a table.

Is it better to have one child?
YesNo
The apartment across from us is currently being gutted and prepped for new residents. What do you know but there was a little table sitting on the patio next to a bunch of other trash. It didn’t hold quite the same level of attraction as my underdog chairs, but it would give me a real reason to go grab those guys. We didn’t wait until dark, we didn’t even veil our little mission. Matt went out and grabbed the trash and brought it back like the massive hunter-gatherer-he-man that he is. 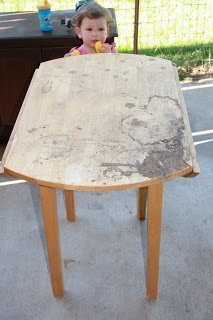 So here is the little table. The two sides pop out for when you have “company.” See how filthy it is? I should have zoomed in on the mysterious goo that about made me, Matt, and Leann all want to puke when we saw it. Matt thought it was either human or animal flesh. I’m thinking it was probably just candle wax, but ever since he said that I haven’t been able to shake the squeemish feel in my stomach. Sick. Like, maybe it was a Fight Club enterprise going on where the previous residents would steal human lard from plastic surgery dumpsters and then make fancy boutique soap. Ugh. I hope not. Either way, I’ve probably seen Fight Club too many times. 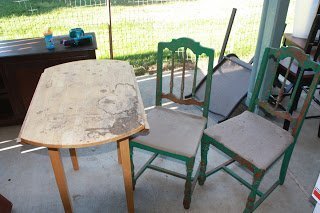 Here are the chairs. They were pretty gross too. I think they might have been sitting outside for several years. 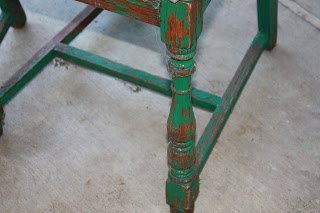 The paint was so old that you could rub it off with a rag! Not exactly the shabby-chic look you want. 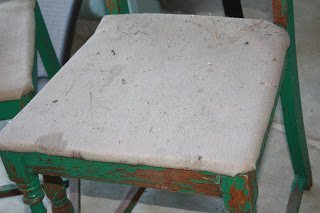 First things first: clean the nasty mofo. Yes, we were able to scrape off the human flesh and I’m pretty sure its sanitized enough. At least it has about twenty coats of paint to mask whatever DNA might reside in there… 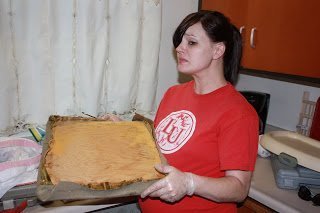 Next up: the cushions and probably one of the ugliest pictures I’ve ever taken. But you know what? I don’t care! I’m 37 weeks pregnant and it is not my current prerogative to try and be all myspacey cute right now. 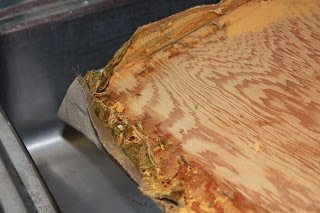 Ripping out the old upholstery–two layers–was so gross. Fortunately, we bought new pads for the chairs cause as I ripped it out the foam inside turned to dust. It stunk too. Not a good sign. So I ripped it all off and then disinfected the wood.
The next part took the longest. We put a bunch of primer, paint, and then glaze all over it. I recovered the cushions, and then Matt and I screwed them on in 104 degree heat. Sick. But after all of that work–we finally feel like a little part of this apartment looks like home. When we took on the challenge of redoing the furniture, I thought, “If I can make the table and chairs cute, I can make our apartment cute.” Badabing badabang! This little engine will do just that. 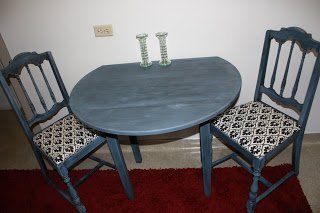 And here are the end results! 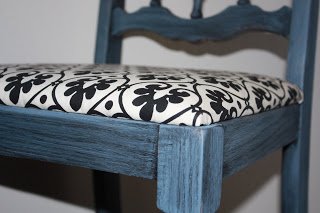 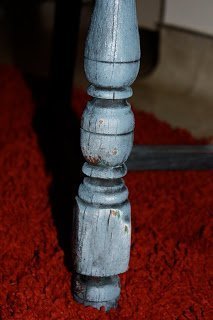 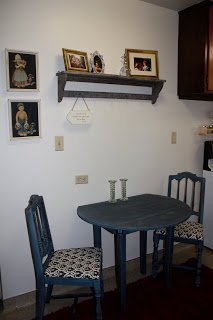 Total cost: Paint and primer–$30, cushion foam–$10, 1 yd. fabric–$7=$47 total! Saaaaweeeet!
Cost of a husband that is willing to be bossed around by a pregnant woman and a mother-in-law that will babysit=priceless. Yah, I could do those commercials.
Cheers!