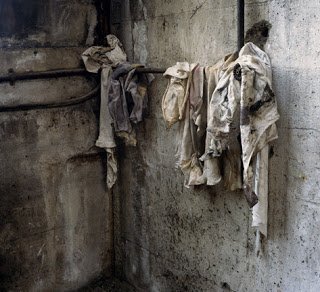 I used to (actually I still like to) make parodies out of pre-written wonders. If stinking Weird Al didn’t have such a rep, I might have gotten to be Weird Hill. It could have been something I did when I grew up. Thanks a lot, Al, for taking my dream job. 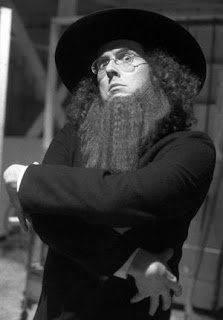 Side note for people who used to attend COBCS-yes, Before it became Heritage Oaks: remember when Joe, Chuck, Nate, Steve Hull, and Chad used to all sing “Living in an Almish Paradise” like it was the coolest thing that ever happened to their nerdy uniformed selves? This was in the same era of saying “Doh!” after everything, in the same vein as Homer Simpson, of course.
Moving on. Back to parodies. Those of you who know my writing history (haha, listen to me!) may be familiar with the Aunt Scarlet Marching Song (because when you’re on your period the first thing you want to do is march around chanting about it). Or maybe the less familiar but equally enchanting spin off of Jonathan Swift’s “A Modest Proposal,” where I solved the problem (8 years back or so) of pedophilia in the Catholic clergy. My English teacher said it was a definite viable option, but kind of crude. I’ve also rewritten Snow White to be a lot more realistic. I mean, come on! Like seven freakishly short men would just leave a beautiful damsel (in a coma) for some guy who gets it all. They’d at least try to get her to wake up on their own. Waiting for Prince Charming–Puleeease. On that same topic, kind of, I’d like to have a go at The Phantom of the Opera because if ever any story needs to be re-written it’s that one. The book is actually pretty lame, but the musical is sensational and I just get more and more annoyed with the fact that gooey Raul gets Christine while the poor, lonely, and yes, ugly Phantom is once again cut off from everything. So lame. Raul, you suck. Can I get an amen?
So why am I ranting about this? Do I have a parody to share? Geez, after all that I wish I did. No, actually I came out this morning and lo and behold, the rag that I had JUST put on my sink yesterday already stinks. Wait, that’s what this is all about? You ask. Well, for those of you who are blessed with a washing machine this is just a mere annoyance. But for me, the person who just did five loads yesterday in the campus laundry—this is an outrage. Now I will have a stinky rag sitting in the bottom of my laundry hamper, spreading its evil stench all over the other clothes and eventually filling my little home with mildew smell. Yuck. I’m so annoyed.
Anyways, here’s the part where the parody thing relates. I looked at that stinky rag, and do you know what comes to my mind? Sonnet 72 by John Donne. I’m such a nerd. I take English geek to a whole new level. In case you don’t just pick up a volume of Donne’s sonnets on a daily basis (I don’t either, just so you know) this is the one about Death. “Death be not proud, though some have called you mightie and dreadfull, for thou art not so. For those whom thou think’st, thou dost overthrow, die not, poore death, nor yet canst thou kill me…” The sonnet is all about how death is actually a good thing because you get to spend eternity alive, and death is just a brief transition. I really like it. I really want to somehow rewrite it for my stinky rag. It would go something like, “Stinky rag, be not proud, though some have called thee mightie and dreadfull…” Ok, so that wasn’t too original. I’m working on it. In fact, this blog is just to announce that, 1. I am going to brainstorm for a parody of Sonnet 72 and find hope in stinky rags. and 2. to beg for ideas about what to do with my stinky rags in the between times of doing laundry? I tried putting them in a bag outside on my patio and do you know what happened? A nasty earthworm made its home underneath it. BLECH! I think I just might rather smell the things inside the house. And I could put them on the clothesline and let them dry out before putting them in the hamper, but its a little time consuming (no, seriously, I do not have a spare second in my day! ok, maybe I do…) and my hands stink after touching them. Essentially, it means I have to touch them four times. 1. Removing them from the sink. 2. Placing them on the clothesline. 3. Putting them in the hamper. 4. Putting them in the wash. That’s three times too many in my book. Suggestions? 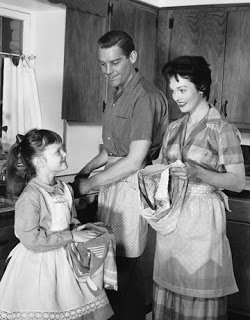 And in case you were wondering, this is what we look like doing dishes in our house. Well, Coco has less hair than this chick, and Matt has more than the father-figure, but we look like this every day. Laughingly washing and drying dishes together. And I wear frilly aprons all the time. Gosh, how did those women do it in the 50’s?
Ok, this was a Seinfieldy blog. A blog about nothing. The show was successful, so therefore, this blog should be fantastic. You see what my life has been reduced–or upgraded (depending on your take on feminism)–to?
But here’s something that is awesome.
All of us have become like one who is unclean,
And all our righteous acts are like filthy rags;
We all shrivel up like a leaf,
And like the wind our sins sweep us away…
Yet, O LORD, You are our Father.
We are the clay, You are the Potter,
We are all the work of Your hand.
Isaiah 64:6; 8 NIV
I’m not going to try to preach, but just think about your stinky rags, think about yourself. Thank God for the cross.

Dear Chuck
Babies, Toddlers, and Augustine...kind of
Some natural tears they drop'd, but wip'd them soon

5 thoughts on “Filthy Rags-A post about nothing, and then something.”