Well, I have learned yet another thing about freezer cooking.

a.) You can actually follow through and do what you set out to do in the first place: cook/assemble freezer meals.

b.) You can shove as much meat as possible into the freezer and hope/wish that the abundance of produce gets eaten in the first week. You can also take up canning. But that seems a bit much after this whole freezer thing.

There’s also the slight chance that your husband will get really enthusiastic about bbqing said meat over the next month. Kind of genius, yes? How come there isn’t some great big pin board for ways to get your husband to cook?

Guys, I will take on this noble task in the future. You have my word. But not right now, I’m a little busy figuring out this freezer conundrum.

c.) You can throw a huge party and eat all the food you bought for one month and hope/wish/guilt your friends into feeding your family for the rest of the month. I’m fairly certain this would be the most fun and exciting choice.

But what did I do? I took the road less traveled and it has made all the difference. You see, no matter how much I wash my hands they still smell like onion and garlic.

Yep, I went with option a.) Except I haven’t finished the entire project. There’s a part of me that is holding out for the bbq and party alternative…

Even though I had the most horrific mess and no idea how to fit everything in my fridge and cupboards, I HAD to deal with it. A month’s worth of groceries bought at the beginning of the month is some risky business. For me, anyway.

Remember how I said that last year I sucked at cooking? And remember even further back, once upon a time, in a far away land where I sort of had my stuff together—I—gulp, couponed? I can hardly believe it myself, but it’s true.

That time is no more. It vanished one day with the mist, or the second child, take your pick. The only constants in my pantry are the three cans of water chestnuts that have been with me all year. Mysterious critters, water chestnuts. I cannot, for the life of me, figure out what I bought them for.

Many of you lovely readers told me I had started way too big and bold. After unloading all those groceries, I agreed with you. Why not start small with like, say ONE freezer meal a week, rather than a whole month’s worth? I’m not a “go big or go home” sort of gal. I’ve never claimed to be anyways. But for this to be worth it I needed it to be big. I want a month’s worth of food in my freezer and a month’s worth of gloating rights.

So. I bit the bullet and plowed through. I got through all but two meals and I figure that since I have the ingredients it’s not like I “failed” at preparing those meals. Here’s how a month’s worth of meals are in my freezer:

1.) I planned 15 meals that can be served twice. I also plan to maybe eat out once or twice. I’m still open to cereal, too, if the mood strikes.

2.) I planned several recipes that can be used in more than one way. For example, I made up this really bomb beef and black bean mix that can be used in burritos, tacos, taco salad, or nachos. Goshdangit. Mexican food is SO versatile, huh? Love it. I will be posting this recipe because it is really very yummy. I made extra of this and put 3/4 cup servings in baggies so that my hubs could have lunches already prepared.

3.) I froze everything FLAT. That’s the biggest factor for space saving. I used high quality Ziplock bags and made sure to get as much air out of them as possible by sticking a straw in the corner of the bag and sucking out excess air and then burping.

Just seeing if you were still paying attention now that I got all Martha-ish on you. But really, I did try to get the air out and freeze them flat. Then, for space sake (and bragging rights) I lined them up library style. I plan on swinging the doors open and thumbing through them like books when company’s over. 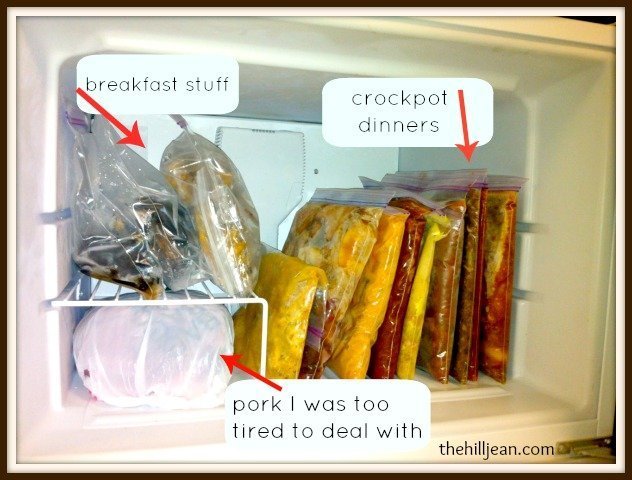 Now, this enterprise took some sweet time. Here’s the breakdown:

I didn’t do all the cooking in one day. I broke it up into two evenings after the kids went to bed. Ain’t no way I was having “little helpers” for this project. I still have two meals I didn’t prepare–but like I said, I have all the stuff so I will throw it together old school style when we feel like eating them.

Guys, I think this might be worth the time, mess, and hassle. I’ll see what I say at the end of the month, but right now I’m feeling pretty snazzy.

Wanna know what our meal plan was and what recipes I used? I will only post this if enough of you ask for it. I don’t want to bore you guys with stuff you’re not interested in, but if you genuinely want to know I’ll be happy to share ????

What do you think? Are you wanting to try out this freezer thing?

26 thoughts on “How To Freezer Cook”