Hi guys. I thought since my last post was TGIF, this one would appropriately follow as OCIM.

I don’t know if others have made this up. Probably a juicier expletive would be used, but I’m sort of a PG blog. I am most certainly not always PG in real life. Mmm. We just won’t rate it.

So, after practically a week of silence I spilled the beans that I am in a rut. A horrid, stinky, funky rut. Bleh. It smells like poop and mold.

Y’all are the best. Simply the best. You commiserated with and encouraged me. Because most of us are in ruts right now due to the general blah that is Januaryfebruarymarch.

One of the things I wanted to do over the weekend to rattle the funk out, was make something. You know, something crafty. I sat around looking at my beads, felt, ribbons and The Cursed Glue Gun and thought. And thought.

And thought some more.

And then said, “Screw it. I really don’t want to bother with all this hullaballoo. Give me a book.”

Well, guess what? It just so happened that a book came in the mail for me on Friday. Not just any book. Oh no.

This book was just published by my very own favoritest boss ever, Barry. 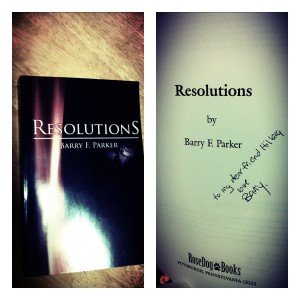 The dude is an oddball librarian who buys all of his workers and their kids Christmas presents every year. My husband and he go on Man Dates and come back reeking of cigar smoke and other spirits.

But all of that is beside the point. The point is, he’s also this closeted novelist. I’ve gotten to read a few of them over the years. He’d sneakily slide a giant stack of papers over to my desk–I’d open it and squeal. It took forever to get him to let me read one of his secret novels.

If you know anything at all about publishing you know that it is a pain in the arse and nearly impossible to get anything published these days. The folks who succeed have to jump through a thousand hoops, and often self-publish to avoid all of the chaos that ensues. It sucks, cause there are many gifted writers out there who just cannot get a deal because publishing is so dang difficult!

Well, Barry submitted his favorite of his seven novels to a publisher, and they offered him a book deal right away.

Yah, that’s where our jaws drop. You know it’s good.

Well, actually, no. I did not.

You see, my darling son somehow shoved his entire (maybe not entire) index finger UNDERNEATH my EYELID!!!!!

It was a freak accident of course, but OMG it hurt like a mother. I couldn’t open my eye for the rest of the day. It leaked tears constantly, and it hurt. So. freakin. bad. 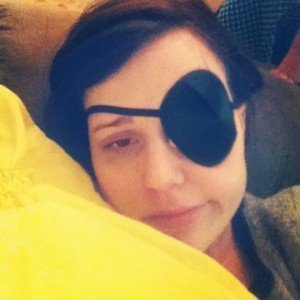 Now, in my head, I thought, “Cool! I finally get to wear an eyepatch!” It was a sort of bucket list type thing. But in reality? It was so not cool.

Matt kept sneaking over to my left side and freaking me out. Jerk.

My depth perception was so off. Found that out the hard way whenever I tried to pour a drink.

My right eye was exhausted! Seriously, that is some hard work just using one eye. I tip my hat to you, pirates.

So yah, I didn’t read the totally awesome book. But now my eye is better and I will start!! I need some cheering after watching the season finale for Downton Abbey.

Here’s to a new week, a new book, and two eyes!

Who Gives A Rat's "Tail" About Cupcakes?
22 Things I Have Never Done
Three Simple Words That Will Melt A Mama's Heart