So yesterday was pretty much the worst.

When you have a personal meltdown by 10 am you know you’re in for it. And yah, I was definitely in for it.

It’s been a busy two weeks. Between a blog conference, visiting family, and a complete makeover on my parent’s bedroom (more on that later), oh, and an absent husband–it’s been quite the time.

What I need is a solid 48 hours where I stay in my pjs, watch New Girl, eat carbs, and hang with my husband. A babysitter would also be preferable.

What I have is two wild children, an absurd pile of laundry, no food in the house, a missing husband, and a preschooler on spring break. Gahhhh! Did I mention we live five hours from all family members?

Babysitting is expensive, yo.

My weekend was actually pretty fantastic…just majorly exhausting. If you follow me on Instagram you’ll have seen the great influx of my #transformation pics of redoing my parents bedroom. THAT will be a fun blog post, I promise you because the before and after shots are positively breathtaking.

However, anytime you have a serious before-and-after project you’re bound to be tired. I had plenty of help from my terrific family, but I think I somehow painted the energy I have left from Blissdom into the striped walls that now shine from the new bedroom. Oh, but those stripes are sweet.

So after a whirlwind weekend of paint and Target, and more paint and more Target, I had to make the lovely trek home alone with two kids. And by lovely I mean horrendous.

The party-sized bag of Aged Cheddar Pirate’s Booty that I single-handedly consumed is proportionately telling of my trials.

Also, the five hours that stretched into seven, and the wrong turn at the end that led to an extra thirty-minute detour are details enough, right?

The moment of real clarity came when I got home and attempted to replace the toilet paper roll. In slow motion–so slow I could have stopped it–this happened: 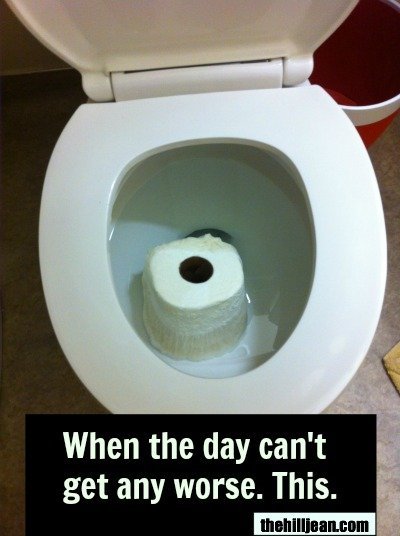 After that I just threw in the towel and called it a day.

Except I couldn’t call it a day because I have two small wildebeests to bathe and keep alive until their father returns. Also, they were encrusted with Rainbow Goldfish, and a sponge bath was not an option.

After draining the rainbow-turned-duck-poop-colored bath which they both insisted on drinking via sucking on washcloths, (OMgosh, so gross) I herded them into bed. This is when I wish I had a dog. A sheep dog, to be precise.

I confess that there were no redeeming, sweet moments at the end of this godawful day. No, just a huge sigh of relief when the shouts of tattling and the motley requests for water, wedgie-sorting, and epistemological quandaries were finally quieted.

Next time I’m sending them with their daddy.