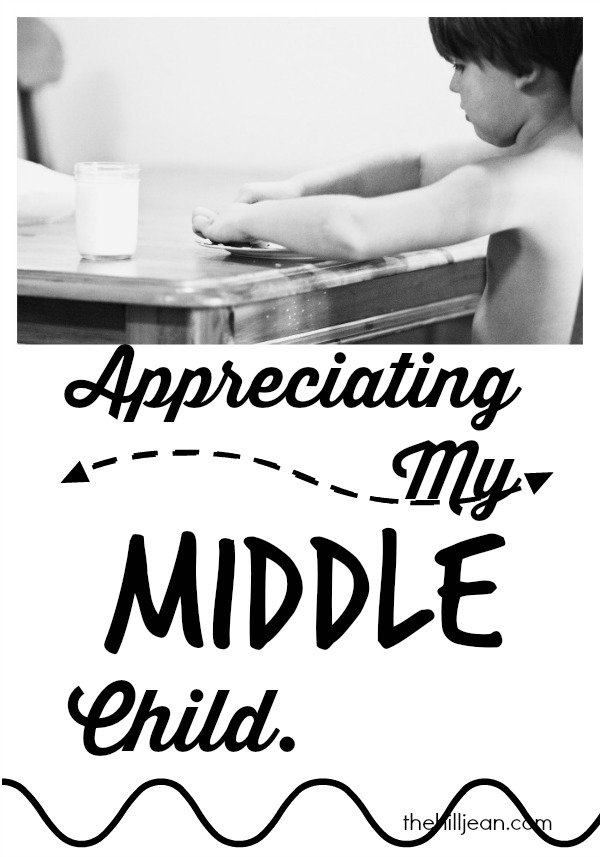 I love my children to the moon and back. Each and every one. I love them all. But I think there are certain seasons where I “like” one more than another.

Is that terribly wrong?

Seasons that are sugary sweet–so delightful you can hardly believe you get to be a parent.

Seasons that are stormy and scary–that open up a part of your heart you wish you never saw. Seasons where you become “that mom,” the one who has the vein in her forehead that looks like it’s going to burst out and strangle anyone within reach.

And then I guess there are seasons of calm and quiet–I’ve never experienced such seasons, so I don’t have much to say on the subject.

I’m kind of in the stormy season with my middle child. We’re having a rough time. He’s not in school, like his big sister. And he’s not a baby anymore, like his little brother. He’s very much in the middle, but it’s like we both really remember when he was my baby.

Honestly? I’ve lost my cool with him more in the last few months than I probably ever have in the history of me being a mom. He has a meltdown because his banana broke in half, and then I have a meltdown because he cares so much about his banana. That’s the kind of stuff we’re dealing with, folks.

It’s bad, but I’ve already labeled him my little black sheep. The difficult one. The middle child.

The other day was Sunday. For the last few weeks, Matt and I have had a hard time getting Chaucer to go to Sunday School. He says that his class is “for baby kids,” and truthfully, he’s one of the biggest kids there. But he’s not ready for the kindergarten class, and he certainly doesn’t belong with the babies. Being “4” is a tumultuous middle ground, isn’t it?

And so, our middle child finds himself in a very “middle-child” predicament. And he hates it. But he went, because we made him. We dropped him off, and the last look he gave us was one of disgusted tolerance. Annoyed, ticked, offended…you fill in the blank.

When we picked him up he was fine. Happy to see us, anxious to get his lunch. His teacher stopped us before we were out the door. With tears in her eyes she told us that Chaucer had done something extraordinary.

It was time to put away all the toys, and Chaucer noticed that one little boy got to be the exception to the rule.

Chaucer placed his hands on his hips (a posture I’m well-familiar with) and snarled at his teacher, “Why does HE get to have his toys?”
The teacher explained to us that the boy in question has autism and has a very, very difficult time in class.

She told Chaucer that “God made him a just little different from you, and he cannot talk yet. He needs these toys to help him feel comfortable during class.”

She said that after a moment, Chaucer’s face melted from a snarl into a soft look of understanding. Slowly, he pushed his toys towards the little boy and said he could have them. She said that for the rest of the time Chaucer was kind and gentle towards him.

She said, “Chaucer has come a long way. I just want you to know that he made my day today. He’s doing great.”

Inhale in. Exhale out.

Not my black sheep. Not my difficult child. He’s my extraordinary middle child, and I am so thankful to have him. This year is a year of learning. Learning where he fits, and where I fit.

Sunday was a day of grace that paved the way for the rest of my week. Yes, there was a meltdown Saturday night, and there was a meltdown Sunday night. But on Sunday afternoon, I got to hear about my kid being kind and selfless. This is enough to sustain an entire week’s worth of thanksgiving.

It also was an incredible reminder that we are all of us a work in progress. Thank God we’re not a finished product. I certainly have a lot of work to be done still, and so does my little boy. But you know what? He’s being kind. He’s giving hope. He’s making his hormonal mother weep little tears of joy. Thank you, thank you, Jesus.

#gratefulmom
What I want to say at your wedding, but never say.
rheumatoid arthritis

One thought on “I’m Thankful For My Middle Child”