I don’t know why we do it. Why we have no problem handing our children over to a strange man in a costume every year at Christmas.

Little wonder that they never “cooperate” for the photo. But we kinda like that too, don’t we?

We went to a Christmas party for our apartment community and they had a Santa there. He was an awesome Santa–I could totally believe he’s the real one.

But that didn’t matter to my kids. Coco wouldn’t touch him with a ten foot pole. She hid under a table and steered clear of the big man in the red coat.

I was sure that Chaucer would love him. I thought they’d be kindred spirits–seeing as Chaucer will probably be a Santa Claus one day. Boy was I wrong.

Santa was really nice and cooperated “with” Chaucer. We got the most wonderful photo I’ve taken all year. Seriously, this is a gem. 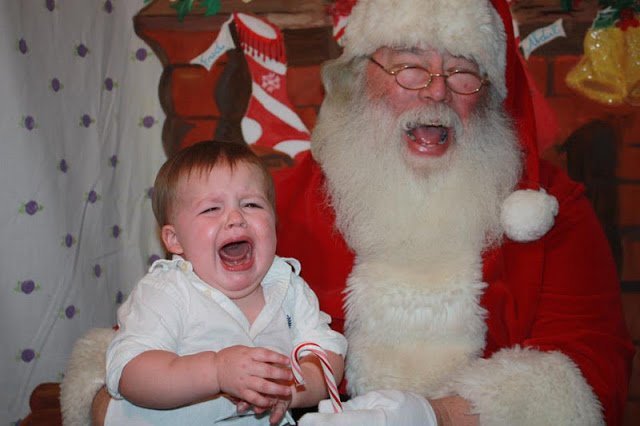 And I need your help. It NEEDS a brilliant caption. It’s the kind of photo that should be floating around in the humor section of Pinterest. So tell me, what would does this photo say to you?

Wordful Wednesday: The Most Interesting Gourd In The World
Gained Too Much During Pregnancy
How To Not Lose Friends While Dieting

8 thoughts on “Wordful Wednesday: The Most Wonderful Photo Of The Year”