This morning, I was supposed to board a plane for New York City. My husband is there now, without me. We were to have a week together split into two parts: the first half at Yale University for a conference, and the second in the Big Apple–experiencing all of its wonder for the first time ever.

The good news? I’m still planning on being a part of the second half. *fingers crossed*

So what happened? Well, my job got in the way again. You know, that 24 hour gig I’ve got where I serve as the center of two little universes? Yah, that.

It’s funny, this job of mine. I’ve never done anything so messy, so exhausting, so taxing as this…being a mom. You picked up on that, right? This mom business is border-line slavery. But it’s my job right now–forever, and I love it. I love it more than anything I’ve ever done.

There are so many things I love about being a mom, but I guess the thing that’s most poignant at the moment is that I’m needed. I love that.

That’s pretty selfish to admit and say out loud. But it’s true. I remember being so awed and overwhelmed when my newborns would respond to me. Of course, this was mostly due to the fact that I was their food source, but still. I loved that they needed me.

My kids are still little, but beyond being the maker of PB&J’s, I am not the only food supply around. They can and will do a lot things by themselves. But no matter what they’ll learn to do independent from me, they need me (and they need their daddy, too, of course–but this post is about MY job. Not his).

My kisses magically cure all the boo boos. I have the power to exterminate monsters and scary shadows. And when they are sick–I’m freaking Florence Nightingale.

That’s why I needed to stay home. Chaucer needed his Lady with the Lamp. Me.

36 hours before I was to leave for New York, Chaucer had a hell night. He couldn’t sleep, he was delusional, and he needed to lay between Matt, Me, and Bay Bay (Mimi’s dog).

I’m pretty sure he said, “Mama, mama!” like four-hundred times in a four hour period. That’s 100 times an hour! And I’m not even a math person!

I prayed one prayer a few hundred times as I struggled to comfort and relieve him.

“Should I to stay home? Are You trying to tell me something??”

I woke up with the dreadful knowledge that I’d have to leave him the next morning. How could I leave him knowing that he would ask for me one hundred times an hour and I wouldn’t be there?

By afternoon it was crystal clear we needed to take him to the doctor. It was also crystal clear that I would not be leaving in the morning.

Sure enough, the little dude has a double ear infection. And sure enough, God gave me my answer. 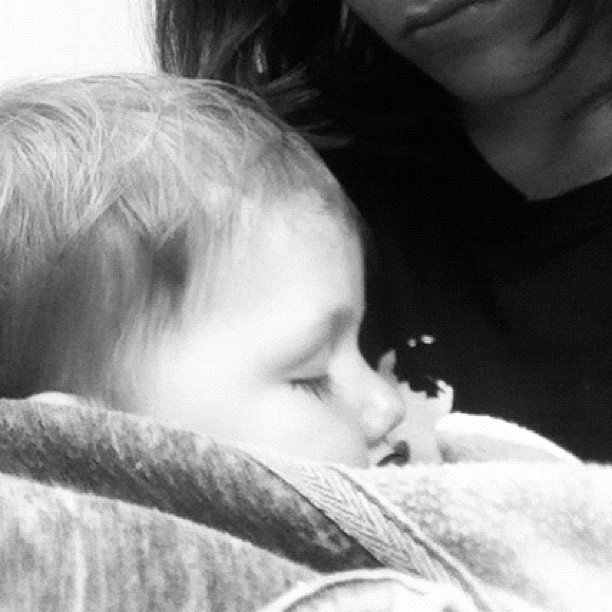 Amazingly, we were able to get a ticket for me to leave on Saturday for only $180! So here I am. Doing my job.

It makes me question my own sanity, this job of mine. But it’s mine, and I love it.

This post was written for Mama Kat’s Pretty Much World Famous Writer’s Workshop. Seriously, if you like to write, she has great prompts!