Heeeeeey! Greetings from the grave. In case you missed me at all, I was near death, so you would of reaaaallly missed me had I not thwarted the reaper with some mean antibiotics and a hardcore mother-in-law. Or was that the other way around? Kidding!

Ok, so that might be a tad dramatic but in all honesty, I felt like I was dying. I pretty much got sick the first day we were in New York, but I was in New York so I couldn’t be sick. Make sense? I pushed and pushed and wore myself out. The night we got home I knew I was in trouble. I was worried I wouldn’t wake up in the morning. For real. That is what took me to the ER at 10:30 pm (1:30 am NY time).

I was there for five hours. Of course. Who ever is in the ER for anything less? But that’s a story for another time–because even though it was terrible there were like maybe four comedic moments. Funny only to me. You’ll dig it.

The diagnosis? Bronchitis, double ear infection–that’s right–27 year olds can get those, apparently. And then the big kicker was dehydration. I was all screwed up. IVs, shots, X-rays, breathing treatments, and a ratty hospital blanket. That’s what the trip consisted of.

I was supposed to fly home the next morning–or that morning, I guess. There is NO way they would let me on a plane. For whatever reason, my eyes had swollen up to Quasimodo status. I looked like the bullfrog of Notre Dame. Plus I was delirious. Plus I was coughing up green lungs. Plus I wouldn’t get out of bed.

Matt had to fly home for work, and the kids and I stayed behind for several more days. My AMAZING mama in law took care of me the whole time. And, because there’s always an “and”, Coco got sick. Poor baby just lay next to me on the bed for 24 hours. She had another type of flu–a stomach one ????

So Leann took care of us for three days and I somehow came back to life. 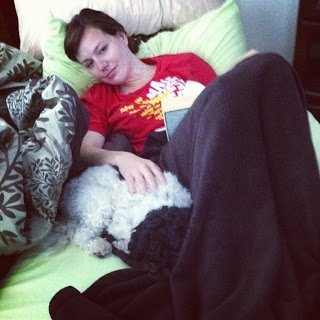 Coco got over the flu, and Chaucer ignored both of us the whole time. He was only interested in BayBay (the dog) and Papa. Little toot.

My father-in-law escorted me and the kids home. Because he is also super awesome. There is no way I could have navigated the airport or handled Chaucer on a plane by myself. We had a running joke that people would look at us and think he was some rich retiree who got more than he bargained for. And, we were right. We had several people call him “dad” and assume we were married. OMGross.

While we were on the plane Coco of course had to go to the bathroom. As she was sitting there, she got a very intense look on her face.

Coco: “So we’re in the bathroom now.”

Coco: “And the plane has a bathroom.”

Coco (excitedly): “Well…then it makes sense that we’re still on the plane! We’re in the bathroom, on the plane!”

Me: “You take after your father.”

I don’t know if that’s funny to anyone else. If you know Coco, you know she’s got a keen sense of logic and the discovery she made while on the toilet was like gold to her. I think we might have another logician in the family.

We also might have a pilot in the family. Is this not the cutest thing you ever did see? 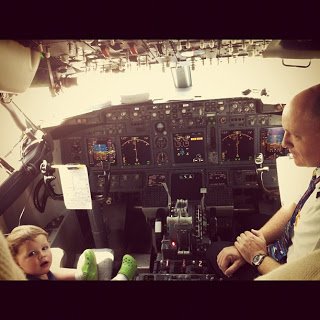 I promise to post details about New York on Wednesday!

A Little Bit of Everything
Conversations With Coco: "M" Is For Murder
Just Call Me Florence Nightingale