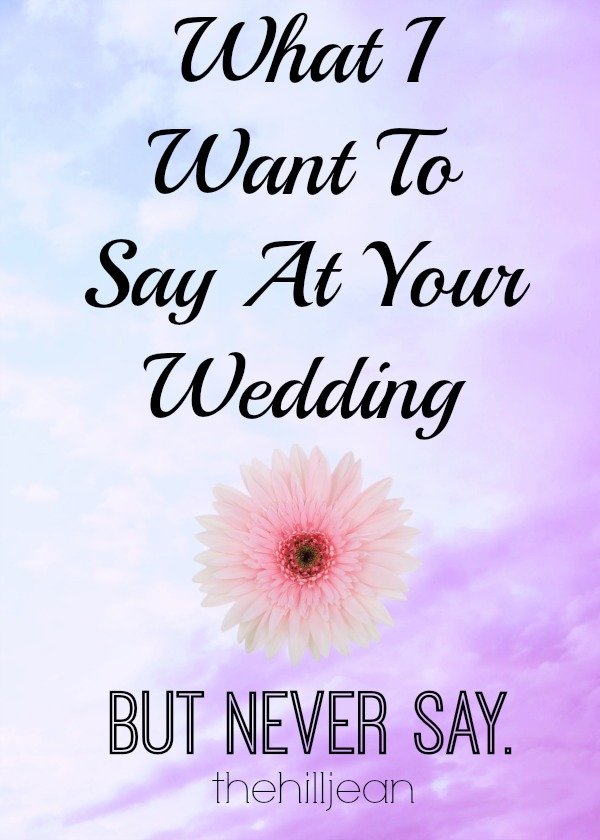 I attended a beautiful bridal shower for my future sister in law last weekend. The memory of it sits in my mind like a pink pillow with laced edging. It was perfect. It was precious. And even though I wasn’t the one getting married, I sailed off on a little cloud.

There was a newlywed game where they had filmed my brother answering the same questions asked of his bride.  I watched my baby brother speak with the simple adoration of a smitten young man. The words bounced off the screen and blushed his bride with that gooey, sappy love we’ve all gotten to know so well thanks to the RomCom. And/or personal experience.

There were other words–words from seasoned wives; advice, encouragement, funny platitudes. There were gifts–beautiful gifts that will stock their new home. Gifts that they’ll use for years and years. There were prayers–prayers of thanksgiving and supplication on behalf of the new couple. They were dunked in butter and sugar-coated with all the necessary love to start a new, good life together.

And even though none of this was for me and my husband, I felt inspired. I felt uplifted, encouraged, and eager to be a better wife.

This December it will be eight years for us, and I don’t believe anyone has ever once asked how we are really doing as a couple.

I watched my future sis-in-law absorb the shower of confirmation and encouragement upon her marriage. I could tell that while she didn’t enjoy all the attention, she was keen to take in all that was said to her.

And a dark thought crept inside and said, “This is it.” This is all she’ll get.

Because I know that the send off is somehow so much more exciting then the mile markers. It’s all about the proposal–the engagement–and then the Big Day. Sometimes I feel that weddings are like watching the beginning of a marathon, and not planning to stay for the finish.

Before the bride can even send off the thank you notes its, “How’s married life?” and “So when are you going to have kids?”

My husband and I have a pretty solid relationship. We’re doing good–by the grace of God. And though we’re young, we’ve already seen plenty of examples of marriages falling apart. We have peers who married around the same time, or after us.

It hurts to think that I sat at their wedding, that I invested in their future, and now it’s gone. But I wasn’t there, really. Sure, I sat through the wedding. I asked the silly questions: “how’s married life, and when are you going to have kids?” But I didn’t inquire further. I didn’t try to encourage. I didn’t think to pray. And I definitely wasn’t there for the mile markers.

Have you ever ran a marathon? I haven’t, and I don’t know that I ever will due to foot problems. But I’ve watched my mom, sisters, and friends train and prepare for half and full marathons. I was there with them at the starting point, and I sure as hell wasn’t going to miss the finish.

I wrote about how inspiring it was to watch my beautiful mom run her first half marathon. How excited I was to see her at each mile marker. I cannot even imagine being there at the beginning, and then leaving without watching her finish.

I really have no doubt that my sweet brother and his darling bride will make it. They are both awesome people, they love God, and they are committed to each other as friends. The strange sadness that crept in at the end of that sweet day wasn’t for them, but for others. For all the couples right now putting thousands of dollars into a day, and overlooking the cost of the actual commitment required.

As a culture, we’re all about the beginnings–the glamour–the romance. There’s a reason so many beloved fictional TV couples cycle through a union and breakup. It’s because we’re not all that interested in the long-term. It’s more the heat of the moment, the passion and drama of the NOW. You want examples?

Ross and Rachel on Friends.

Ted and Robin on How I Met Your Mother

Matthew and Mary on Downton Abbey–heck, they had to kill him off just to bring in more drama.

I could go on, but I fear I’ll get distracted by plot lines. My point is, we love a good beginning, but we suffer through the middle and never make it to the end. In a sense, our entire culture dooms couples with a truncated ending because we can’t stand the long, mundane journey.

I’m thankful that when I married my husband, as young as I was, I knew we were on a journey. I expected highs and lows–and man, have we had them. Something, probably built into my pragmatic personality alerted me early on that the “romantic” phase wouldn’t be forever. But I never really worried. I knew that I was marrying a guy that could keep me laughing, and that was really the most important factor.

I think I’ll share more of our story around our anniversary week, if you care to hear it.

You might think this a dismal piece. Doomsday Divorce, and all that. No, it’s not. I guess I feel a call to arms personally, and I hope to share that with you. Namely, this: invest in other couples, in other families. Be there beyond the wedding day. Ask them how they are doing. CARE about their answers.

We send these runners off with such hype and then we ditch them before the sound of their footfall fades away. We need to be there, guys. I need people to be there for me. I want cheerleaders, mile markers, and folks handing me water-bottles along the way. Because I know I’m still in the very beginning stage of this marathon.

They sound alike, marathon and marriage. I’m not going to delve into semantics, but I guess I want to end with that. That these two things are alike. They are exciting. They are challenging. They require training. And not everyone makes it to the finish line.

I want to be there for this sweet new couple, every step of the way. And I want someone there for me and my husband. How about you? Could you use a cheerleader, or a bottle of water? Am I the only one who feels this way?

16 thoughts on “What I want to say at your wedding, but never say.”