Have you heard of Maria Kang? She pissed off a lot of people a few months back with her extremely annoying “family portrait.”

Maria is someone who spends a lot of time on her body. Even a quick glance at her portrait will tell you that she is a woman dedicated to strengthening, training, and sculpting her physique into something amazing. 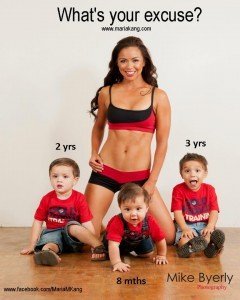 She is also a mom of three. Yes, Maria Kang. You can do it all.

Now, even if you’re able to squelch the green-eyed monster and appreciate Maria as a woman who takes care of herself with the devotion of an olympian athlete, there is still the annoying text to deal with:

Now this, this was directed to other moms.

I watched the whole thing happen while munching on a bag of Doritos.

Welp, she’s at it again and this ballsy mom didn’t even change her slogan! You too can join the No Excuses Mom and find other moms who don’t make excuses for their less-than-perfect-mom bodies. Instead of sharing bowls of Kraft mac n cheese with their tykes, No Excuses Mom[s] whip those bodies back into the shape they were meant to be (read: not resembling anything that once gave birth).

I kept quiet last time she made waves.  This time I want to talk. And it’s not even really about Maria Kang and her obnoxious movement, per se. It’s about all these fitness and health campaigns that slap you on the back and say, “Come on! Why don’t you have an athlete’s body?! Try harder!”

I come from a family where fitness is very important. I’m not going to post a picture, but basically I have a really handsome dad and really handsome brothers–and they all work out. They all look good. My mom and my sister do the whole half-marathon thing. They hike, run, and take dance classes. Being “fit” is very big in my family.

The only difference between my brothers, sister, and I is that I got sort of cut off from the whole fitness regime at an early age.

I would have been that obsessed runner. I was that obsessed runner–for a time. I know what the runner’s high is and let me tell you–it’s good. But right when I sort of got the itch for it, I found myself in surgery. I had about a decade of foot surgeries that told me, “No, absolutely not,” every time I fantasized about running again.

I thought that the foot surgeries restricted me, and then I was diagnosed with rheumatoid arthritis.

I’ll never forget the moment where I was bathing my infant son, Chaucer, and everything fell apart. He was about four months old, his head cradled in my hands, his eyes gazing into mine with that gooey baby-love that speaks, “I trust you with everything.”

My hands just collapsed and Chaucer’s head fell under the faucet. I called the doctor the next day and thus commenced the dramatic process of my diagnosis.

It escalated to the point where I couldn’t open a jar of mayonnaise. I couldn’t buckle Coco’s carseat. I couldn’t turn the key to my front door. I couldn’t pull my hair into a ponytail.

I am no longer that girl. I can do all those simple things now with ease. {Praise God!}

But when I view Maria Kang’s image, when I read her words, I am suddenly that girl again.

I see things I cannot do. I see squats that will throw my knees and hips out. I see dumbbells that cannot be grasped by  shriveled hands. I see pushups that result in torn rotator cuffs.

I see tears, heartache, and overall–bitterness. What’s my excuse? I can’t even bathe my baby, let alone grasp a 5 lb. dumbbell, Mrs. Kang.

My ability and confidence in myself went from ten to zero during that bath episode with my son. It scared the bajeezus out of me, as I’m sure it would any mother.

There are thousands of people who are sick and struggling. People who you would never guess are living in excruciating pain. These are the people I think about when I see Maria Kang’s campaign.

To be clear, I think it’s admirable to strive to be as healthy as possible. I also commend those who are able to complete such challenges as triathlons, marathons, and the like.

Where I stand apart is the language and the expectation to be as close to perfect as possible. 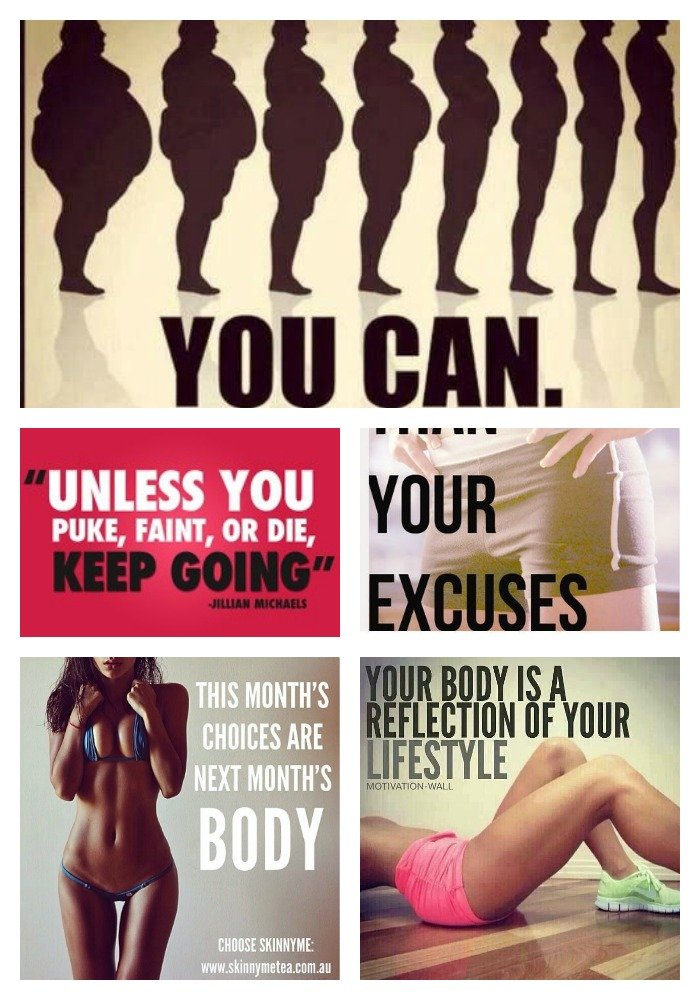 My Pinterest feed is replete with images like these. I know that they are meant to serve as hope and motivation for moms with love handles. I know they inspire many people to make better choices and to keep going even if they feel like giving up.

I also know that for every average mom with love handles perusing Pinterest during lunch, there’s a woman curled up with a heating pad waiting for her pain pills to kick in. She looks at those pictures and feels worse. She feels more isolated, restricted, and banned from normal life because of the messages that underscore each image.

I don’t want to ban Maria or Crossfit or fitness memes.  I just want to be an advocate for those voices that you aren’t hearing in our body-image-obsessed culture. I would like to stand up for the sick.

Have you ever thought about what those memes and campaigns look like to someone battling cancer? Or Multiple Sclerosis? Or Lupus? Or Rheumatoid Arthritis? Or Fibromyalgia?

Here’s what I want to put out there for those who are chronically ill: you’re not alone.

We humans get these shells that are supposed to last us through one lifetime. Often, they fail to do that. Things need replacing, extracting, and sometimes they just don’t make it through. No matter how sculpted or fit the shell, it cannot be exempt from things like illness, accidents, or death. 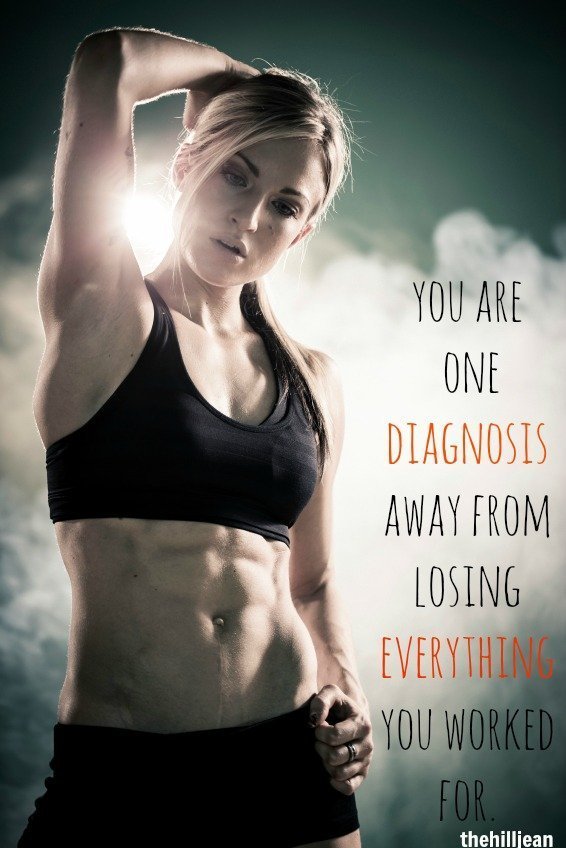 That’s depressing to read, isn’t it? Well guess what? This is what I see when I read arrogant propaganda about “lifestyle,” “discipline,” and “hard work.” Of course those things count in achieving a great body–but they won’t protect you from losing it all. Trust me. 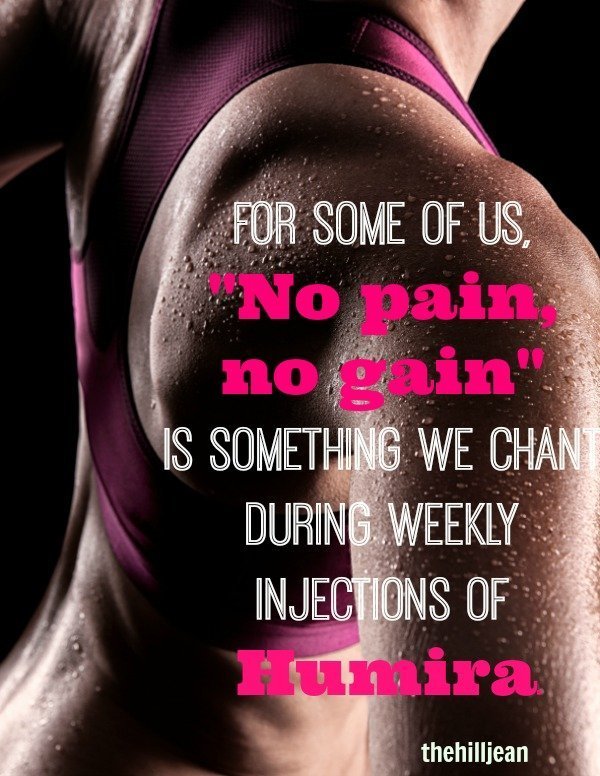 For where your treasure is, there will your heart be also.

To my fellow travelers who are sick–don’t let the world tell you what your treasure ought to be. Sculpt and nourish your soul. Discipline your mind with the fervor of an olympian athlete. Know your body for what it is–a shell.

To my friends who are strong and healthy–stand up for the sick. Be kind. Be compassionate. And know your body for what it is–a shell. 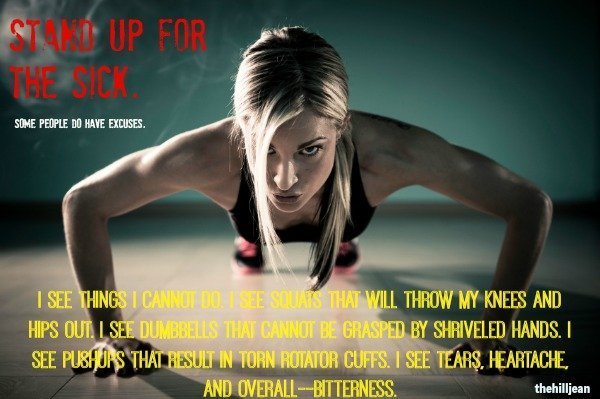