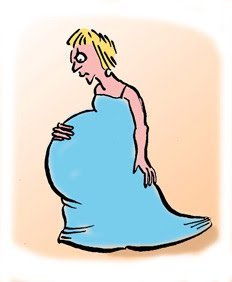 “While you’re probably enjoying your cute soccer ball tummy up in front, chances are you’re not enjoying whats going on in your backside: hemorrhoids, which more than half of all pregnant women experience.”

Is it better to have one child?
YesNo
That, my dear friends, was the opening statement for the “Your Pregnancy This Week” email courtesy of the What to Expect Website. I’m not here to complain about hemorrhoids (huge sigh of relief from poor readers) but since I haven’t blogged in over a week, I thought I’d share something that seems to keep manifesting in my mind lately. Namely, that life can be so humiliating.
Think about it: you come into the world naked and attached to a nasty placenta. You poop uncontrollably, cry uncontrollably, can’t hold up your own head, and, of course, need to be fed every four hours. And that’s just the life of a newborn. There’s all sorts of basic needs along the way from baby to toddler to child to teenager (I’m not even going to reflect on the humiliating things that happen when you’re a teenager) to adult. And just when the acne clears up and your hormones are tamed— you get pregnant! Then its a whole new game of humiliating and awkward things that happen to your body as that What to Expect quote should suggest. Giving birth is probably one of the most humbling experiences this life has to offer–unless you turn it into a weird competition for how “natural” you can go (but again, thats a tangent I don’t want to give in to). I remember thinking, after the most-likely-26-year-old-male-anesthesiologist came in to give me the epidural, “Well, who else wants in on this show?”
And then, for those of you that have given birth, you know that it doesn’t end there. Oh no. There’s that relearning everything-you-thought-you-knew-about-going-to-the-bathroom-stage. Sheesh. Not looking forward to that again.
So far, I’ve only gone through the milestone of giving birth. But I know there’s more. Today, I got into a crowded elevator to go up to my doctor for my 26 week appointment. There was this poor old man with a walker all the way in the back, and as I, the sixth person entered the elevator, he said “Oh no.” I didn’t think anything of it, and then when we reached his floor he got off with his escort and said “Thank God I’m off that thing” and started breathing all dramatic. I saw him shuffle away and noticed the catheter bag hanging down from his waist. The one lady left in the elevator said, “That’s so sad. He probably had dementia…Sure does stink that it has to end that way.” I thought about my own Grandma and how my mom would have to change her diapers, bathe her, and get her food. Its like we have to go full circle and exit this world in total dependance upon others.
So that’s depressing, huh?
Well, like I said, its been on my mind a lot. I’m not going through some existential crisis either, I’m just reflecting on how nice it is that this isn’t it. This is not the final resting place, thank God.
Lately, I’ve been agonizing over my growing body–stupidly getting depressed about gaining weight and having my feet swell. So dumb. But in a lot of ways, I’ve bought into our cultural ideology that I have to have a pregnant belly the size of a softball and the rest of me needs to be the size of a toothpick. So dumb. And then, once I’ve given birth, hurry and zip up my skinny jeans so that I can hear people say, “You don’t even look like you’ve had a baby!” Such a pejorative remark, if you think about it. And I stand condemned: I’ve said it before as a compliment. Well, after giving it some thought, I think thats a really superficial and dishonest thing to say. We’ve already covered the humiliating aspect of life–why should we pretend that its behind us? I think if I hear that “compliment” from anyone I’m going to say, “But I DID give birth! And if you had been there, you would DEFINITELY know there’s no denying that. So thanks, but no thanks.”
This probably has reached the point of rambleness. I don’t know if I’ve communicated this jumbled thought process in any coherent way. But basically, when I saw that poor old man in the elevator, today the five pounds (gained in four weeks) that were so depressing to me earlier this morning seemed completely unimportant. Our culture agonizes over NOT looking pregnant, NOT looking like you had a baby, NOT looking old, NOT looking helpless, and the fact is, life is designed to be a little humiliating. Maybe part of it is to remind us that we came in as dirt, exit as dirt, and stand before God as dirt without Christ. Most likely this humiliation has something to do with sanctification.
Well, that was confusing, wasn’t it? Sorry, it was just time for a confessional rant.

How Do I Love Thee? Let me count the ways...
Dear Chuck
The Second Time Mom

4 thoughts on “Musings From an Existential Preggo…you were warned”