For the past two weeks I’ve suffered from this strange ringing in my ear. When asked to describe it to the doctor I said it was more wailing and gnashing of teeth than actual ringing, but that wasn’t on Web M.D.’s code of symptoms, so I kept that to myself.

Both the doc and I were surprised when he suddenly announced out that he, too, could hear this wailing and gnashing.

Hurray! A medical discovery–and I got to be a part of it.

While the wails were more like a banshee with a cold, the gnashing, upon close examination was actually a stream of words–and as we followed the sounds of hell starting in my ear and then the doctor’s, our search led us not into a waxy canal but there, sitting in two chairs.

The banshee and the gnasher of teeth.

“Euueeeeeuhhhhhhhhhhhhhhwaaaaaaaa” gnashed the other, with body language and expression that said, “This sucks, and I want out of here. Also, I would like to play with that ear-device and can I have sticker? It’s time to go home and watch Toy Story for the forty-millionth time and I believe I’m about to poop my diaper…wait for it…yep. I just pooped.”

“But you don’t understand! I believe I’m having phantom hearing when they’re asleep or otherwise occupied? When will this horrible sound go away?

“When they move out.”

With a script for earplugs and a look of sympathy that said something like, “Better you than me,” he left me and my minions to go tend to actual ear-n0se-and-throat problems.

Me? My problem is that I have two whiners. Make that forty whiners, plus Caillou, because I live in a community with a ton of kids.

While I’m condemned to listen to all forty children wail and gnash, there is a nice consolation in knowing that it’s not just my kids. And, most importantly, my kids aren’t the worst.That right there makes me feel much better than it should. But still,  I have to listen to a lot of whining.

And then, the most cursed of all:

Never has the word “stop” taken so long to say as when it is in the mouth of an angry six year old. This word really does belong to  one particular boy on our playground. The way he says it with the added Ws and H’s and U’s amalgamates his ownership. For who could possibly break such a complicated bond of letters. They’re his.

I certainly don’t want my kids bringing them home.

If he were my child I would rather put a pencil in my eyeball than listen to that odious sound all day long.Wouldn’t you? Oh wait, you haven’t heard him.

Let’s play a game. The Would You Rather Game. I always love these questions as icebreakers and in long car-rides. But today I did something special: I wrote them up myself AND they are all related to parenting. Cool? You don’t have to answer all of them but it would be fun to hear a few of your choices, just for kicks.

Oh, and it would wonderful if you could share, tweet, pin it as well–whichever you prefer. I wanna get a bunch of peeps in on this game! 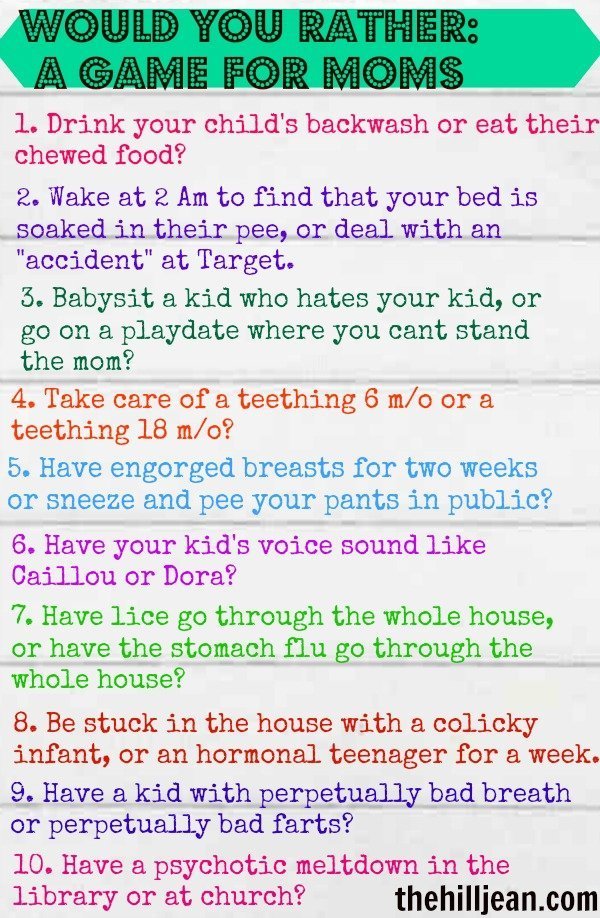 Wordful Wednesday: The Most Interesting Gourd In The World
What Does Laryngitis Sound Like
lame halloween