While I had a good time oohing and ahhing and OMG what the heck is she wearing??! I was mostly excited to see some awards go to Les Miserables.

Guys, today I’m going to talk a bit about Les Miserables. You see, it is very near and dear to my heart. So much so, that I have named my first child Cosette. Yah, you could say I’m a fan.

I read the abridged version in high school. I walked into that book completely unprepared for the heart-wrenching and awe-inspiring effect it would have on me. Fantine, in particular, was devastating.

Is there a more tragic literary figure than Fantine? I don’t know. She’s completely screwed over by her lover, cheated out of a job, swindled by those who care for her child, and manipulated into prostitution. She makes Romeo and Juliet look like a walk in a pink park.

Fantine suffers so greatly because she has more at stake than just herself; she is a mother. It’s because she loves Cosette so much and will do anything, ANYTHING to keep her child thriving that Fantine is subjected to such humiliating ends.

I wasn’t a mother when I read Les Miserables for the first time, but I think a little piece of me identified and clung to that tragic maternal devotion.

Obviously, I was both thrilled and mortified to discover that Hollywood was once again tackling this most favorite of stories. I was excited to see it portrayed, but scared that they would screw it up. The big name celebrities especially freaked me out.

And like most people, I really questioned Anne Hathaway’s credentials to play Fantine.

I’m sorry, but Fantine is not Cinderella. Not even close.

So I got a little huffy and irritated and said things like, “What’s SHE doing in that role?”

And then I found out her mom had actually played Fantine when Anne was a little girl. In an interview, Anne remarked that as she watched her mother portray Fantine she sat in the audience and just weeped. 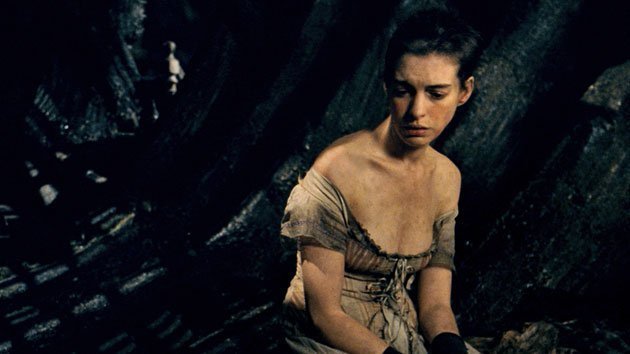 Strange enough, after watching that interview I knew that she, too, had connected with it. So, with great anticipation, I looked forward to finally getting to see my favorite story come to life on screen.

Finally, people would get why we named our daughter Cosette.

I cried throughout most of the film. I know it was a solid musical, and that bothered some people. To be honest, I had a moment of, “Oh crap, are they really going to sing through the whole thing?!” But I got over it.

And Fantine, singing “I Dreamed A Dream” just about knocked the hairs off my legs.

Princess Diaries or no, Anne Hathaway didn’t just portray Fantine. She WAS Fantine.

I can only describe it as excruciating to watch her sing that most famous of songs. We’re all romanticized by it. It’s packed with the word “dream” and has all the right crescendos. Covered by hundreds of artists, it is the ultimate song for theatrical force and persuasion. Heck, I cried with all the rest of them when little, old Susan Boyle got up there, shook her hiney, and then proceeded to shake the walls with her miraculous rendition. It was beautiful–it was triumphant.

When Anne Hathaway begins her song with the wasted energy of one who has just been raped–all triumph and splendor evaporate from the notes. Instead, we hear a woman whose life has crumbled to bits. We see someone, a mother, who hates this world but cannot leave it because she has a child. She wants to give up, she should give up, but she cannot because of her daughter.

What mom can stand by and not fall apart?

Last night, Anne Hathaway won the award for Best Supporting Actress for Les Miserables, and I could not have been more happy for her. It was really the only part of the ceremony that I cared about. And even if you’re not a huge Anne Hathaway fan, I think her acceptance speech showed grace and appreciation for the role she was given. She made a direct address to Sally Field whom she said is a “vanguard against typecasting.”

Well done, Anne. And thank you for delivering the raw, excruciating performance that brings Victor Hugo’s masterpiece back into the forefront of our culture.

Oh, and for all of you who are now going to name your child Cosette…I did it first.

Have you seen Les Miserables yet? What did you think of Anne Hathaway’s performance?

Be Your Best Your
Wordful Wednesday: Cosette, a dress, and Les Miserables
Ready For New Years!

24 thoughts on “Anne Hathaway and the Golden Globes”